Since I last blogged, I have been researching my great, great grandfather, John Stevens, who was resident in Hartwood Asylum, at North Lanarkshire Archives in Motherwell.

What really struck me was the difference in John’s mental state before and after his admission to the asylum.  It’s almost as if John knew he was ill when he was living with his wife and then his mother but neither of them could cope and, when he was admitted to the asylum, he was looked after by people who knew how to help him.

As a reminder,  here are the descriptions of John’s health before he was admitted to the asylum:

He lies in bed and is dull and apathetic and refuses to rise. He says he was employed with Robinson and Charon in New York (he was employed with the firm in Belfast). He keeps on saying that ‘it is down’ constantly referring to his rupture [that is a hernia], he states it is not ruptured and that his testicles are down.

Patient’s mother states that he wanted a doctor, he put on a new tie for him, that he exposes himself indecently in the house and that he is sometimes afraid to sit down in case of breaking his testicle. James Stevens [his brother] states that patient blamed his mother for bringing down the rupture and was going to strike her and that he walks around the house with his trousers down.

He is considerably demented his memory is very poor.  He is also very irritable, his speech is quite incoherent and he cannot give a rational account of his doings.

James Stevens his brother says he is very depressed and that at times he becomes excited and violent. He is guilty of indecent exposure of his person.

I was pleased for John that, one month after his admission, his medical problems had been investigated and a diagnosis given:

This patient has a dull heavy complexion. He is considerably demented and is childish and incoherent in his speech. His memory is greatly impaired. He has great enlargement of the nose and facial bones and very large hands. The appearance suggests acromegaly [a disorder that results from excess growth hormone].

I was fascinated by the fact that John’s doctors had compared the size of his hands and feet to that of a ‘normal’ person and the tracings of John’s hands and feet had actually survived for me, his great, great-grand-daughter, to touch and view (with John’s hand being the black outline): 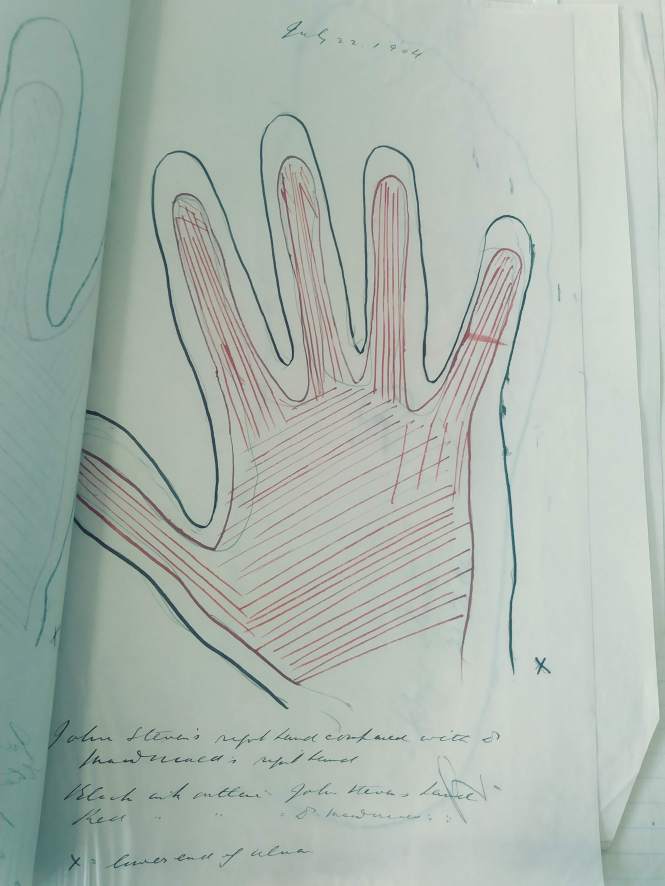 I was interested to discover from John’s medical notes that he was still extremely ill in the asylum but he seemed a  lot more contented:

This patient is considerably demented. His expression is fatuous and silly. He is very childish and presents a very real picture of ‘second childhood’, both speech and conduct are infantile in nature. His memory is considerable impaired, both for present and remote events but specially for the former and it costs him an undue almost painful effort to recall many of the major incidents of his life such as his work, his marriage, his family etc which ought to be remembered with a minimum of effort and it is with displeasure that he receives any questions which have as their object the investigation of his life history and with relief that he returns to the happy life he leads now, free from all care and responsibility. Living in the present and for the present neither looking backwards nor forwards, no incidents became of an unpleasant nature and no schemes necessary for the future.   He seems perfectly contented with himself and his surroundings and is like a growing child receiving new impressions day by day gazing with often wondering eyes at the pictures on the walls, at the newspapers and of the windows and so on. Yesterday he had a small piece of a newspaper and followed them up and down the ward and pointed out repeatedly when and as capable 3 or 4 advertisements saying ‘See this’, ‘That is good.’ and so like a child who after learning something, lets everybody know how clever it is. His speech is slow and hesitating when asked questions regarding any effort to answer but not to slow and with some animation when he is allowed to speak about the subject which interests him and he is often interrupted by childish laughter, occurring without any apparent cause, but suggestive of the glee which a child displays on showing to others its cleverness or its mastery of something new. Of course he is unlike a child in that there’s no mental growth. Mentally he appears the same today as on admission, if anything perhaps more contented and more obedient, having settled down into a regular routine and not requiring the persuasion he did at first before doing what he is asked to do. His habits are moderately clean and he requires to be well looked after on his account of his occasional lapses.

I thought I would finish this blog post with a little more of John’s life story.

When John was admitted to the asylum in March 1904, he left a wife and 3 small children (aged 6 years, 4 years and 7 months) behind in Belfast.

This is John’s middle child, his only daughter, named Maud, who would become my great-grandmother: 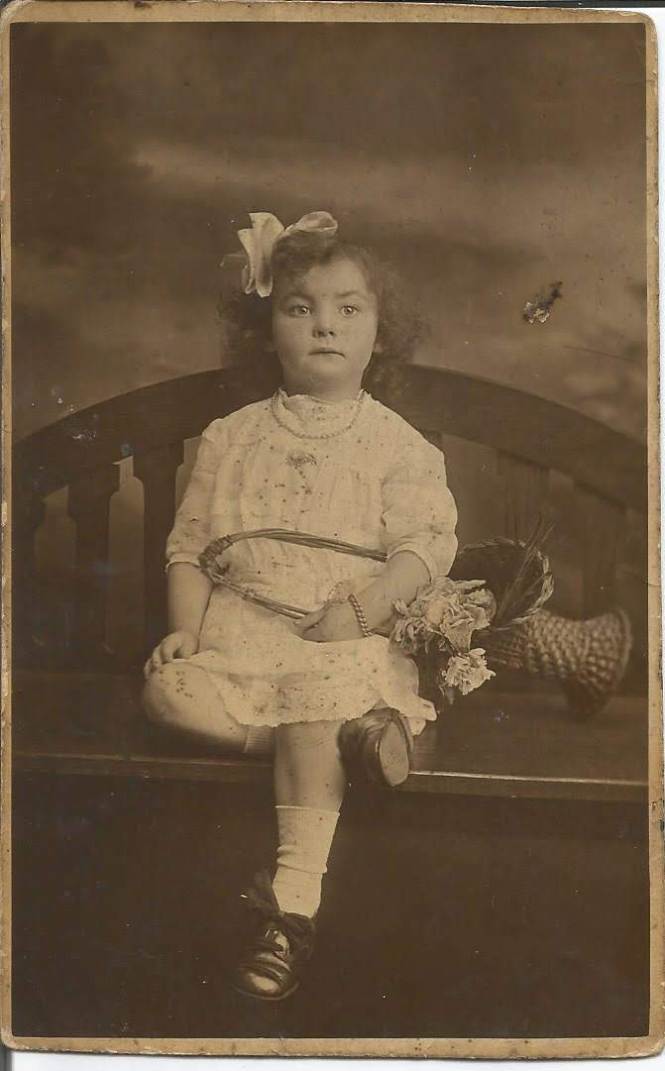 Maud was obviously too young to understand what happened to her Daddy but I reckon she would have been old enough to understand that her Daddy had disappeared.  In this photo I would say Maud is maybe aged 6 or 7 and she doesn’t look very happy.  (Actually when I review our surviving photos of Maud, she only actually looks happy after she married, perhaps her family life without her Daddy was so hard and her family suffered so badly).  Maud lived until 1995 and is still remembered as a true matriarch of our family.

Finally, I have been racking my brain as to where John was buried.  His wife and her children and grandchildren emigrated from Belfast to Glasgow in 1925 and John is therefore not buried with his wife in Tollcross cemetery, Glasgow or with his daughter Maud in St Kentigern’s cemetery, Glasgow.  I also discovered that John was not buried in the cemetery at Hartwood asylum indicating that his body had been ‘claimed’ by his family.

I then wondered if his mother and siblings in Rutherglen might have buried John in Rutherglen.  I e-mailed the Bereavement Services department at South Lanarkshire council and they confirmed that John was indeed buried in Rutherglen cemetery with his parents and brother.

My good friend and colleague Jane at Turnstone Genealogy in Rutherglen was kind enough this week to go and find John’s last resting place for me: 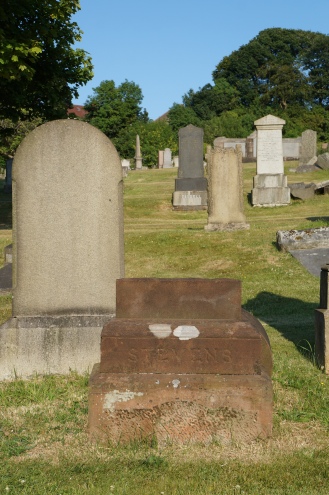 As you can see the family headstone is rather broken but, as a family, we will see if we can get it repaired and we will take some flowers in tribute to John.

I hope you’ve found reading about John Stevens interesting.  I’m really discovering so much more about my ancestors via their asylum records.

I will hope to share with you in a few weeks some more of the surviving medical records for my ‘Ancestors in Asylums’.  I’m also looking forward to exploring surviving poor law records for my ancestors who were in asylums.