THE LIFE STORY OF ELIZABETH CADDEN

This blog post is to commemorate the life story of my maternal grandmother, Elizabeth May Cadden, who was born 100 years ago on 25th August 1918 at Crumlin Road in Belfast.

My grandmother was the daughter of Thomas Cadden and Maud Stevens who married in St Matthews Church, Belfast in February 1918.

There is a story to my grandmother’s conception. Thomas Cadden was from Co Fermanagh and Maud Stevens’ family had been living between Ballymoney, Co Antrim and Belfast. Maud’s mother (her father John had died in an asylum in 1905, see my previous blog post on John’s stay in Harthill asylum) had brought her family up as Church of Ireland and took in boarders in Belfast. Maud’s mother decided to take in the Catholic lodger Thomas Cadden who then got my great-grandmother pregnant with my grandmother. A household of mixed religion in Belfast was not a wise thing to do (and my mother has a theory that Thomas Cadden must have been a friend of the family or known to the family because Maud’s mother was a very sensible woman who would not have taken in a Catholic lodger into a Church of Ireland household in Belfast).

My grandmother was the eldest of 5 children.

This is my grandmother with her brother John:

The extended family stayed in Belfast and Ballymoney until my grandmother was aged 7 and then they all moved to Glasgow. There were 2 reasons for the move to Glasgow. My grandmother was ill and could not get appropriate medical treatment in Ireland but the whole family was in danger. To quote my great-grandmother, burning papers had been put through their letterbox in order to burn the house down because they were a mixed religion household.

This is my grandmother (on the right) with Margaret Masterton: 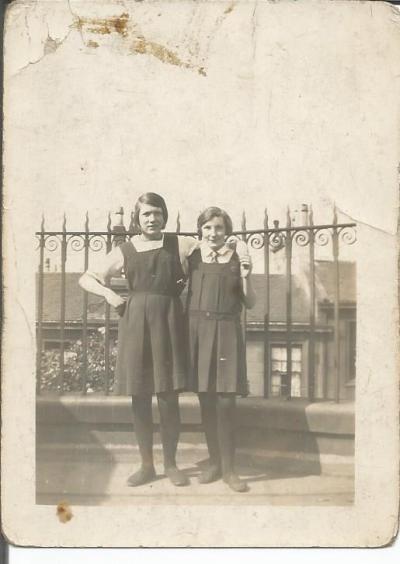 My grandmother had to leave school at 14 due to family finances and was immediately employed in the cash-room at the Colosseum in Jamaica Street. Again, due to family finances, my grandmother had to go to work dressed in her school uniform. At the outbreak of war, my grandmother became a tailor’s assistant for a Mr Archibald and she made the RAF and Army uniforms for her brothers, future husband and future brothers-in-law. She was also a fire watcher during the War.

She met her husband-to-be, William Armour, at a St Andrews Ambulance dance at Glasgow University Union (the exact same building where her eldest daughter would meet her husband at a dance) and they married in January 1944 at St Agnes Church, Lambhill.

This is my grandparent’s wedding photo: 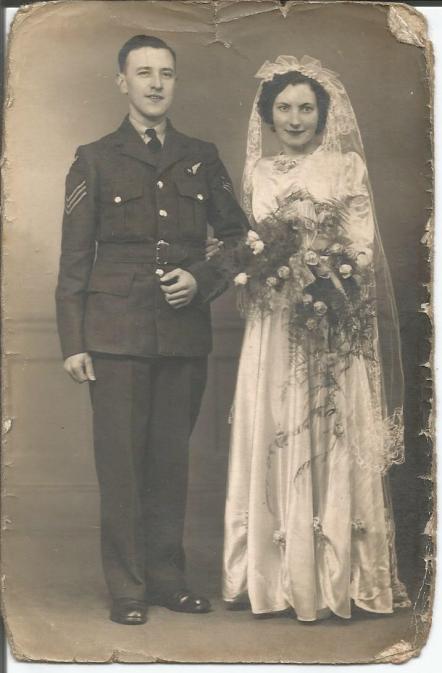 After my grandparents married they initially lived in the Armour family tenement flat in Kelvinbridge until it was on the verge of being demolished by Glasgow Corporation and my grandparents then bought, with a great struggle, their family home in Broomhill where they were to live for the rest of their lives.

My grandmother didn’t work for a number of years whilst she brought up her daughters, Doreen, my mother, and Kathleen, who died 3 years ago.

This is my grandparents with my auntie Kathleen:

When my grandmother started working again, she had many different jobs (in particular many manual jobs whilst her husband was ill and unable to work) until she settled in shop work in 2 famous Glasgow department stores.

After my grandmother eventually retired, she enjoyed spending time with her 4 grandchildren.

This is my grandmother, my mum, me and my cousins: 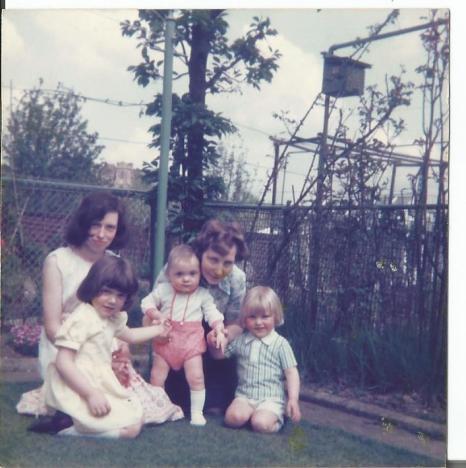 My grandfather died in 1990 and my grandmother continued to live in the family home in Broomhill supported by her daughters until she broke her hip and never managed to walk again. She spent a final few months in the Nazareth House care home in Cardonald where her daughter Doreen had volunteered in the early 1970s when it was a children’s home.

One thought on “THE CENTENARY ANNIVERSARY OF MY GRANDMOTHER’S BIRTH”